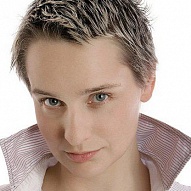 As a little girl I was involved in gymnastics, and I dreamed of someday becoming an Olympic champion. But this remained just a dream..

For me, this project represented a challenge that also touched on my own Olympic dream.

For four and a half years this project was my life, and I put all my knowledge, skills, and soul into it. There were so many sleepless nights, disputes, bad decisions and minor victories.

It was professional bliss to work with the Sochi 2014 Organizing Committee team and with the partners of the Games on this complex project. There wasn’t a single slacker on this project. Everyone wanted to create the best Olympics ever, and we made it happen!

«Everyone wanted to create the best Olympics ever, and we made it happen!»

At the opening ceremony, I was crying from happiness, seeing how our site, which was flooded by millions of hits from fans, functioned flawlessly. This was genuine professional ecstasy. Our mobile apps have been downloaded more than 6 million times.

At the closing ceremony, I was crying because I realized that, in all likelihood, there would never again be another project of such incredible complexity.

It was epic! And I’m very glad that I contributed to the Olympic movement along with the team that made the Russian Olympics recognized by the IOC as the best Olympic Games of the digital era.