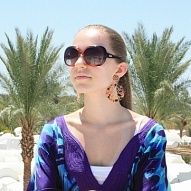 The Sochi Olympics were not only one of the biggest events around the world, it also was profoundly significant for us. When many were eagerly awaiting this grand event, a great team of professionals was working to make it truly epic. And we were part of this team. In the process, many people left the team, many people joined it, but each of us contributed to the development of the Sochi 2014 project. I am proud that I was part of the project, that I worked on such a team, and I’m proud of what we achieved in the end!

When there were only a few months left before the Olympics, I watched as people around were buying souvenirs, mementos, clothes with the symbol of the Olympic Games; they were all looking forward to the start. The Sochi 2014 team, sitting at a table covered with souvenirs and mementos, in suits with Olympic symbols, were also silently dreaming about it ... Over the course of the project we were faced with various difficulties and in the end had already begun to tire a bit. It was a long road which was coming to an end. I couldn’t believe that this project could really come to a close.

«We worked and worked, and finally it was built! Yay!»

On New Year’s, corporate management gave us the opportunity to go to the Olympic Games in Sochi — to rest, cheer on our athletes, and also bask in it all. Typically, when we arrived, for us it was better to not go outside without coats. And after our departure, of course, the temperatures rose to above 25°. We were only in Sochi for three days. The rest of the time we worked in shifts from seven in the morning until midnight. It was the kind of feeling where, at the crucial moment, it seems that if you don’t click on the red button on time, everyone’s going to die.

During the Paralympic Games, we decided to repeat our journey and so we again went to Sochi. This time we were very lucky with the weather. We went to the competition, visited the Mountain and Coastal Clusters, walked along the waterfront, won a bear for Katya at the shooting range, or rather, I won, and dipped Yulya Neustroeva’s boots into the Black Sea. We didn’t ride the ferris wheel, by the way, but I blame Seryozha for this.

In fact, throughout the time we worked on Sochi 2014 there were both good and bad moments, but now all I remember are the good times. The idea to send us to Sochi was wonderful! There’s nothing that brings people together more than the only 24/7 McDonalds. We still have a whole lot of fond memories of our trip and the work on this massive project.

We worked and worked, and finally it was built! Yay!