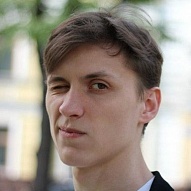 The Sochi 2014 project was already in full swing when I started working at Articul Media. About six months later we were assigned the task of making a brand book. This required a description of the branding rules, and, of course, examples for everything. We tested the rules on a variety of objects, from earrings and rings up to skates and skis. In the end, all the illustrations were globally redrawn at least four times.

The next task was devoted to the test games (this is a competition held over the year preceding the actual Olympic Games). Among all there was to see, I remember a photograph of some kids extending cards toward the Japanese figure skater Mao Asada, hoping to get an autograph. It’s nice to see things that you were involved with in photos and on the air .

«It was a big project, which took two and a half years of my life, and I'm glad I was a part of the festivities»

Even though the tickets were not cheap and sold out very quickly, we decided to attend the team competitions in figure skating on February 8. With a fan passport, there were no problems, and it took about ten minutes. When we arrived at the airport we understood that the spirit of the Games started right there. At the airport there were signposts for those who were on their way to the Olympics.

After arriving in Sochi, I was pleasantly surprised by the airport, as I expected to see the renovations from a decade ago. But everything turned out to be up to par. At the Olympic Park, the atmosphere was festive. And this is what you can’t get in a photograph — just how incredible it all was. I liked the volunteers; one girl who saw us struggling to take pictures of ourselves gave us a hand.

At the Games, I personally enjoyed the performance of the Italian skater, Carolina Kostner. Ours, of course, gave great performances, but for me this was to be expected. One of the strongest impressions was of the mountains. At night, it was especially beautiful to see the cars heading up the mountain roads, looking like they were floating in the air. Only then do you notice the outlines of the mountains against the night sky.

It was a big project, which took two and a half years of my life, and I’m glad I was a part of the festivities.